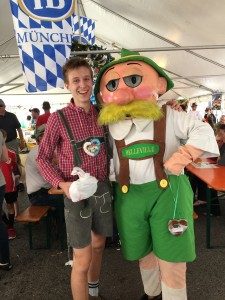 Avenue Realty Associates is proud to feature members of our community! We are your neighborhood realtor! It is our pleasure to bring you an interview with Belleville East, German teacher, Andy Gaa!

What is your official title? What organizations are you a member of that are focused on Belleville’s history or culture?

Where can we still see Belleville’s German culture and heritage?

There are echoes of German culture in Belleville in its architecture, particularly with the hundreds of German Street Houses, which are still standing today, the old Turner Hall, surviving German churches and commercial buildings on Main Street and within the historic neighborhoods in Belleville.

If you walk through Walnut Hill Cemetery you will see thousands of German names and grave stones written in German. There are of course still many people in Belleville and the surrounding town of German heritage, who continue to keep German culture alive in Belleville by supporting Belleville’s Oktoberfest and Christkindlmarkt. We still have two community assets that were founded by the early German immigrants to Belleville which are the Belleville Public Library and the Belleville Philharmonic Society. St. Paul’s United Church of Christ, Christ United Church of Christ, St. Peter’s Cathedral, St. Mary’s Catholic Church and Zion Lutheran Church are all current church congregations that were founded by German-­speaking Bellevillians. Some of these churches continue the German-
American tradition of an annual Wurstmarkt.

Belleville will also soon have a Hofbräuhaus, which will further add to Belleville’s German culture. We also have a very active Sister­Cities organization with Paderborn, Germany that helps keep the connection with Belleville and Germany.

What about Belleville’s culture fits so well with what you teach at East?

When we discuss German culture and history in my classes it is always easy for my students to understand because we have many of things accessible in Belleville and in the Belleville area. My students sometimes do not realize how good they have it as German students at a school such as Belleville East. Most German students do not live in a city with a Christkindlmarkt, Oktoberfest, and soon to be Hofbräuhaus. We can talk about German culture and actually experience these things in our community.

Tell us about the students who participate in Belleville events.

Tell us about some of the ways students apply what they learn in your German classes.

Several years ago, when the Belleville Public Library celebrated its 175th anniversary, some of my students participated by reciting poems from the original collection of German books from 1836. They sang old German Student Fraternity songs for the Alt Belleville Strassenfest/Old Belleville Street festival, which would have been known by the original Latin Farmer German immigrants to Belleville, some of whom lived on Abend Street, where the festival took place.

We also sing German folk songs at the Oktoberfest and German and Austrian Christmas songs at the Christkindlmarkt. An ongoing project is translating obituaries from the old Belleville German newspaper called the Belleviller Zeitung. Many times being able to read this newspaper is a way to find out where someone’s German ancestors were born, as the Belleville Daily Advocate and News Democrat didn’t often say what town in Germany the deceased was from or that they were even born there.

My students translate several obituaries each semester and their translations are posted on the St. Clair County Genealogical Society website. In 2015, a man from California accessed these translations and was able to find out important information about his family’s history, as they were German immigrants who settled in Belleville. The man was so thrilled with this, he wrote to District 201 to thank them for the work done by German students at Belleville East. The Belleville News Democrat wrote an article about this early last year and the article was picked up by the Associated Press and printed in newspapers over the entire U.S. and the article was even on Yahoo India.

Tell me about the trips you take your students on?

German students at Belleville East have the opportunity to travel to Germany with me every summer. On odd years, they can go to Paderborn, Germany on the Sister Cities Exchange. This is a three week exchange in which they stay with a host family. While in Germany, we there are several trips taken within Germany.

The following summer, they host the student from Germany and we travel to Chicago, Springfield and Six Flags. This exchange is also open to students from Belleville West.

On even years, students can participate in the German American Partnership Program (GAPP) exchange. Twelve students from Mainz, Germany come to the Belleville East school district for three weeks prior to Easter, living with the families of Belleville East German students. The exchange students attend school at East for 10 days and make powerpoint presentations to German classes and other classes at school. In June of the same year, the Belleville East students who hosted travel to Germany to stay with the family of the student they hosted. Prior to arriving in Mainz, we take a four day trip to Southern Germany and Austria.

While in Mainz, the students attend school and give powerpoint presentations to English classes on topics relate to Belleville, St. Louis, and the USA. While in Mainz we take several day trips as well. I have chaperoned for the Sister Cities Exchange in the years 2010, 2012, 2014 and will again in the summer of 2016. I have participated in the GAPP exchange at East in 2011, 2013, and 2015. It is important to point out that both of these exchanges are not District 201 sponsored exchanges.

Tell us about the events that your students have participated in.

Since I have been at Belleville East, my German students have helped decorate the square for the Oktoberfest, where my students have also danced, sung German folk songs, modeled German folk­ costumes, and worked at the Sister- Cities food stand. We have sung German Christmas songs the past two years at the Christkindlmarkt. We have participated and helped set­up and clean­up for several festivals in historic districts for the Belleville Historical Society. We have helped work at trivia fundraisers and other events for the Gustave Koerner House Restoration Project. We helped the Belleville Public Library at the 175th anniversary celebration. We have also attended lectures and German­ related musical performances in Belleville. We have also helped in recent years with the Cathedral Wurstmarkt. Every fall my fourth year class takes a field trip to visit German historical sites in Belleville.

I think the most notable events we participate in are the ones that honor Belleville’s traditions and history that help connect my students to who risked a great deal in their life to come to another country and helped our city flourish and grow to be an important city in Southern Illinois and in the St. Louis region.

Why is it important to link Belleville’s German past with its present?

It is important to link my students to the city’s German past because those people who built the beautiful red brick structures that are still standing in Belleville today risked a lot in their home country, some in a failed revolution, and came to this country, helping grow the city of Belleville to be a self­-sufficient city that has been culturally rich. It helps my students put their lives into perspective to ask themselves if they are doing enough in their own lives. By participating in community service activities and German cultural events they can feel the joys of community involvement and learn to be active citizens in our democracy and city.

I would point out how well our district did on the PARCC state scores recently. Our scores were some of the highest in the area. East and West also offer many classes for college credit with the St. Louis University 1818 Program. I have had students graduate high school with one year of college out of the way. For example, second semester of third year and all of fourth year German are available for college credit.