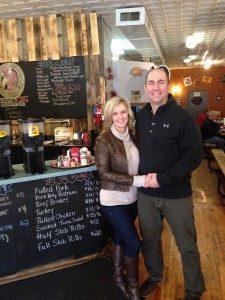 Though they arrived here from separate coasts, Becky and Guy Venuti and their six children feel right at home in the Metro East. Becky, a Physical Therapy Assistant, LAC instructor for SWIC’s Physical Therapy program and Physical Trainer, comes from Seattle. Guy, an esteemed area pediatrician who now teaches residents at St. Elizabeth’s Hospital in Belleville, left his hometown of Arlington, Massachusetts when he joined the Navy in 1987. After completing medical school he arrived in Belleville in 2005 where he has remained ever since.The couple met in Belleville and their blended families are made up of six children and themselves. Four of their children have moved on to college and marriage and now only two children remain at their Shiloh home.

Becky suggested we meet for lunch at one of their favorite downtown Belleville restaurants, The Righteous Pig Bar­B­Que where the couple are greeted with warm hand- shakes and hugs from both patrons and employees. You would think they’ve lived here all their lives. Guy drops off a package for Scott, the owner. “Deer Bacon” he explains. He hunts on a friend’s land east of Belleville.

“We love this place,” Becky says, meaning both the restaurant and the metro­ east in general.

“We’ve been all over,” says Guy. “After leaving Arlington I’ve travelled to Dubai, Thailand… lived in Hawaii for 81/2 years… been all over, but we really feel great about being here. It’s become home to us and our family.”

“This area, Belleville and O’Fallon, is big enough to get everything we need and small enough to make us feel welcome,” says Becky.

“Plus,” Guy adds. “If we really want something different we’re just 20 minutes from Downtown St Louis or from enjoying a great meal on The Hill. But we like to stick around on this side of the river. We’ve even made a conscious decision to do so ­ to support local.”

“Our kids go to school and work in the community,” Becky says. “They went to Shiloh schools and we really loved the small classes. Yet they offered a ton of activities for the kids, and the teachers were great. Then they went on to attend O’Fallon high school and they’ve really been offered a lot of opportunities to develop as young people.”

“We’ve seen such a transition in this area, specifically in Downtown Belleville, from 10 years ago,” Becky explains. “We have this place, Seven, the Wine Tap, Tavern on Main. There’s something about walking down the street and enjoying these rediscovered areas. I would like to see even more places for dinner and hanging out. But the area is really re- establishing itself. It’s safe and close by. Plus, we are so involved in the community with Guy’s practice and teaching and through my own work, so we have a chance to get involved and enjoy our network of friends and acquaintances.

Becky embraces all facets of her work, helping people get back on their feet as a Physical Therapy Assistant with Associated Physicians Group, instructing students seeking their certification as Physical Therapy Assistants in the LACE program at SWIC, and working as a Personal Trainer primarily helping people recover from injury and achieve weight loss. It is apparent that she is extremely proud of her husband whom she met when she took her children to his practice. “His patients love him. He’s had parents and patients thank him for making such a difference in their lives.” Guy smiles modestly and brushes off the compliments but his dedication is obvious through the fact that his phone is a demanding fourth guest at our table by which he promptly answers the many questions of his pediatric residents on duty at St Elizabeth’s Hospital.

Though they disagree on the weather ­ he loves it and she, a native of Seattle’s mild climate, “could do without it” ­ they both enjoy the outdoors. “We love the terrain. “We like to spend time outdoors,” Guy says. “And the topography is great for hiking and hunting. We also kayak in Southern Illinois.”

“We’re both huge coffee drinkers,” Guy adds. “So we love Junction and we’ve discovered Sweet Katie Bee’s in O’Fallon. We love it! We go in there and everybody knows everyone by name. We love that feeling of community and friendship.”

With only two of their children still living with them the couple talks about where they see themselves in the not ­too­ distant future. “Becky has been investigating a business idea and my own retirement is just a few years off. We like the idea of sticking around.” We stand to head across the street for coffee and The Righteous Pig’s employees walk us to the door, telling the couple goodbye. “It really does feel like home,” says Guy.