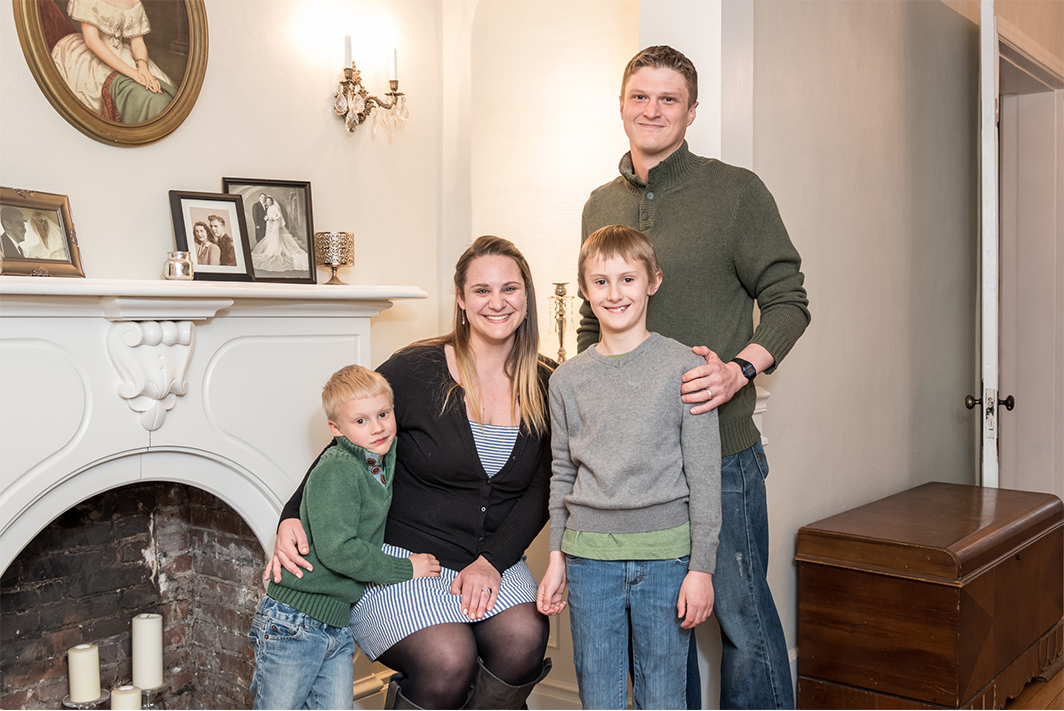 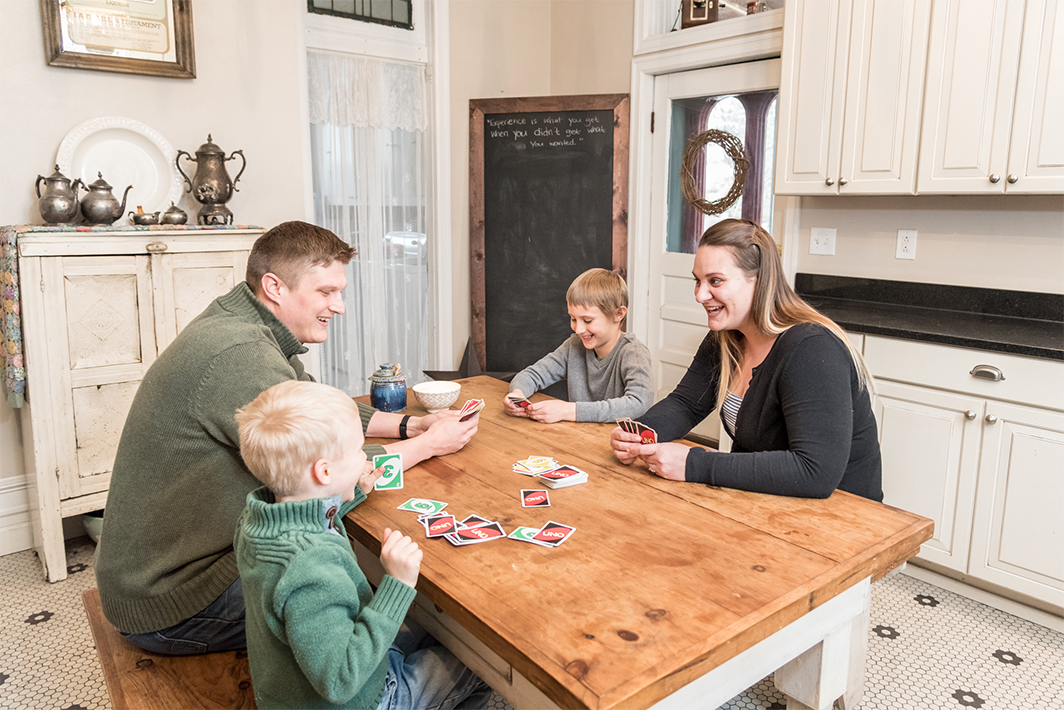 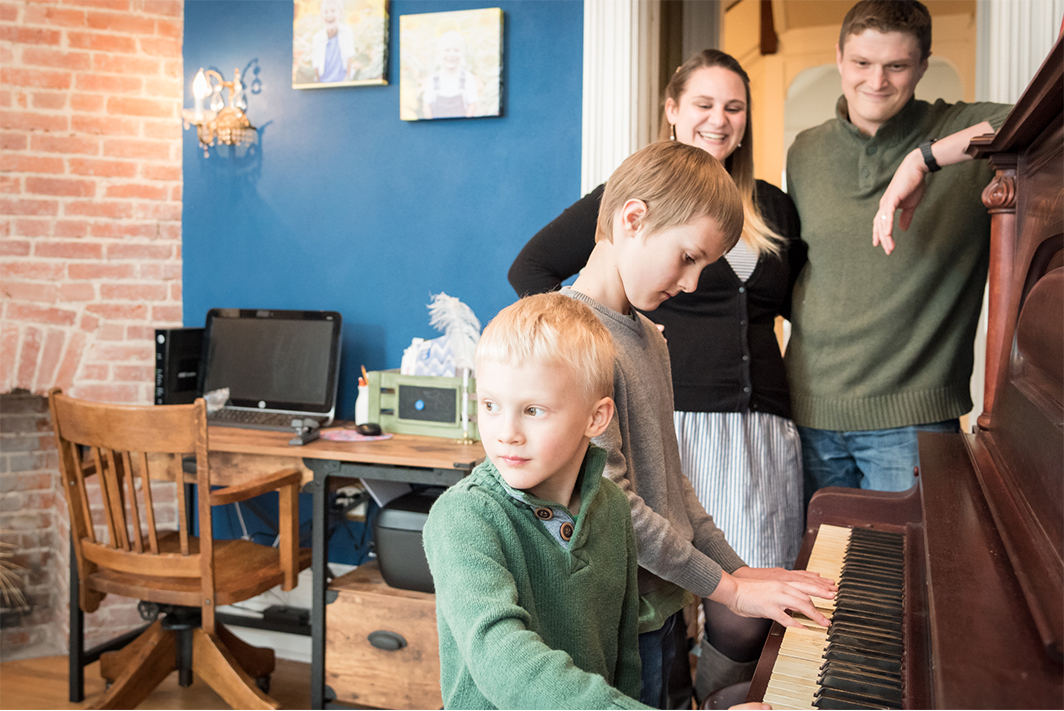 What do you love most about your neighborhood?

There are several things we love about our neighborhood but first and foremost are the people. We have never been so quickly embraced by a community in all our years of military moves. Our neighbors are warm, kind, and welcoming. Aside from the people, we love living on such a historical street. These homes have seen the likes of Governors, postmasters, doctors, statesmen, and even Abraham Lincoln. Many homes today are cookie-cutter, and our neighborhood is filled with homes with character and little details that you just don’t find anymore. From the old brick streets, to the detailed masonry and woodwork on the outside, our neighborhood feels like something out of a movie.

Owning a historic Victorian home was always something that we had wanted to do, but we never thought that we’d find our dream home so early. We had purchased homes in the past, but we wanted this move to be more permanent. As we began looking for houses, we fell in love with the home we eventually bought almost immediately. We were nervous about buying an older home, and about putting in an offer so quickly during our search, but with help from our real estate team were able to get all of concerns addressed along the way. In almost no time at all, we were holding the keys to the type of home we had dreamed about owning together since before we were married. Despite being on opposite sides of the country for most of the process, working with Avenue and the mortgage company was a breeze. We appreciate thorough communication and willingness to help us out even though we weren’t local.

What surprised you the most about the home buying process?

We were most surprised (happily!) about how easily the process went, and how helpful everyone was along the way. We aren’t from Illinois and didn’t know how to choose local inspectors or mortgage professionals, but we were helped throughout the process to make decisions that were best for us. Buying a home is always a little stressful, but it doesn’t have to be overwhelming, and we were very thankful that the process was not overwhelming like it was for us in past purchases.

My experience working with Kathy was_______.

Really easy! I (Emily) expressed interest in our current home on Facebook, of all places, and received a phone call from her the very next day to talk about next steps. Because we were in North Carolina at the time and had never met face-to-face, Kathy put a lot of faith in us when we scheduled 6 showings on one day on a stopover during a road trip to Arkansas. Our dream home was already under contract but she encouraged us to see it anyway and helped us step-by-step when that sale ended up falling through. We always felt supported and had our questions answered super fast, even living 1,000 miles away.

Where did you grow up?  How did you decide to stay here?

That’s sort of a mixed bag for both of us, having both been Army Brats. Emily was born in Cincinnati, Ohio and moved to Fayetteville, North Carolina when she was 4. An overseas move to Italy happened during the ages of 11-14, and then her family settled back in Fayetteville where she lived until 2011. Ash was born in Newport, Arkansas and started moving with the military as a preteen. He has lived in Kansas, Oklahoma, and North Carolina. As a couple, Ash and Emily have lived in North Carolina, Florida, Arkansas, North Carolina again, and now Illinois. As far as deciding to plant here in Belleville, as a family we spent a few months on assignment at Scott AFB in 2016. During that time we had a chance to explore the area and really see what it had to offer for people stationed at the base. One area that really stood out to us was Downtown Belleville. The city felt like a warm hometown to raise a family. When we found out that we would be transferring to the Scott AFB area on a more permanent basis, Belleville was our starting point.

What is your proudest accomplishment?

For both of us, it’s definitely being a parent. Teaching our boys to grow, learn about the world, and overcome challenges is an accomplishment that renews constantly.

What was your childhood ambition?

Emily wanted to be a Zoologist or TV News Anchor and Ash had lots of ideas, but the main focal point of what we both wanted was a tight-knit, supportive family unit.

In Belleville it is Garfield Street. One of my favorite spots in Belleville, it’s almost like stepping back in time with the old brick streets and saloon on the corner that now houses the Belleville Historical Society. It’s one of my favorite streets to walk and is such an example of what can be done when people make a commitment to preserving history and old homes. In the St. Louis Metro Region, it is the St. Louis Zoo. The zoo is not “hidden” per se, but it reminds us all of the time why we love living near enough to St. Louis to be able to make quick trips into the city as often as we’d like and take advantage of all the free things for families to do.

What’s been your biggest challenge?

For Ash, the biggest challenge has been in finding a balance between a challenging career and being able to spend enough quality time home with my wife and kids. Finding that work/life balance has not always been easy, especially when work has been more demanding or when I’ve had up to an hour commute in the past. Luckily, where we are now makes it easier to spend more time at home, and less time trapped in traffic. For Emily, it’s been finding a way to plug into new communities all the time. Some people never leave their hometown and have built-in networks around them. The feeling of “starting over” every few years and being a 14-hour drive away from family never really gets easier. I’m thankful that of all the places we could choose to plant more permanent roots, we ended up in such a welcoming community for our boys to eventually refer to as their hometown.

What was your first job?

(Emily) I always would babysit or do odd jobs for neighbors like mow lawns or rake leaves but my first job as a taxpayer was slinging ice cream at Dairy Queen. (Ash) My first job was a paper route that I started when I was 12. I would wake up in the morning at 4:30am to deliver newspapers to about 100 homes in our surrounding neighborhoods.

For both of us, our greatest inspirations are our mothers. They both taught us early on the value of hard work and overcoming challenging situations, and how to see the positive in even the hardest circumstances.

We both love to travel so the top would have to be something like “visit every continent” or “see the sun rise in every time zone.” Locally our bucket list items include catch a show at The Fabulous Fox, pack a picnic and enjoy the Missouri Botanical Garden, and maybe someday open a bookstore on Main Street in Belleville.

What organizations do you love?